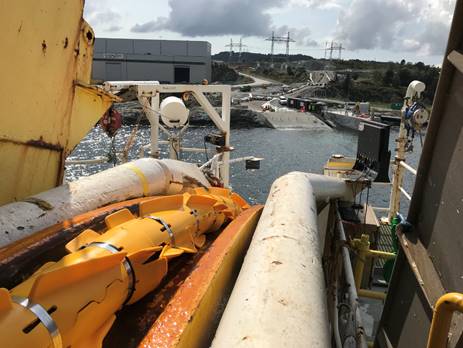 For the past two years, BEIN Engineering has been assisting Nexans in the engineering and planning on one of Nexans’ most complex cable installation projects. Four cables have been installed in the Fensfjorden, north of Bergen. The route was very challenging, with a steep slope at the north end and a confined and narrow entrance at the north end. The maximum water depth was 530 meters.

The cables were pulled from Nexans’ cable-laying vessel ‘Skagerrak’ onto the first cable landing at Mongstad, where the cables were sea hang off was established by divers using lace up grips (Chinese fingers). From here the seabed plunges steeply down to approx. 200 m, with a slope of up to 86 degrees. Here, the sea cables once again secured with a hold back a approximately 180 m depth, before they were laid further across the fjord.

The cable down the steep hill is covered with strakes, which significantly reduces the effect of VIV (Vortex Induced Vibrations). Installation analyses was made in Orcaflex, a dynamic analysis program to ensure proper installation down the steep underwater hill. Orcaflex has also been used to make modal analyses of free span on the slope, which in turn have been used in VIV and fatigue calculations to document the cable’s lifetime.

At the north end, just outside of Iledalsvågen, the cables were again pulled ashore. again pulled ashore. The cable was floated onto floating buoys pulled in on the water surface, and lowered to the seabed by use of smaller workboats. Before the cable was pulled into Iledalsvågen, a total of approx. 1700m subsea cable was floated out on the open water. After the entire cable was pulled ashore, it was then lowered using one of Nexans’ specially developed vessels. Cable lowering required precision, and positioning was ensured using the ROV and the positioning system of an assisting diving vessel.

The engineering of this project has certainly been interesting, with demanding route planning, complex analyses, equipment specifications, and preparation of procedures. BEIN has been involved in the project from start to finish, including follow up on the marine operations onboard the vessel. Together with Nexans, we are proud to announce that all the cables have been successfully installed.

1 thought on “The Fensfjorden Project (Nexans)”

This website uses cookies to improve your experience while you navigate through the website. Out of these cookies, the cookies that are categorized as necessary are stored on your browser as they are essential for the working of basic functionalities of the website. We also use third-party cookies that help us analyze and understand how you use this website. These cookies will be stored in your browser only with your consent. You also have the option to opt-out of these cookies. But opting out of some of these cookies may have an effect on your browsing experience.
Necessary Always Enabled
Necessary cookies are absolutely essential for the website to function properly. This category only includes cookies that ensures basic functionalities and security features of the website. These cookies do not store any personal information.
Non-necessary
Any cookies that may not be particularly necessary for the website to function and is used specifically to collect user personal data via analytics, ads, other embedded contents are termed as non-necessary cookies. It is mandatory to procure user consent prior to running these cookies on your website.
SAVE & ACCEPT